skip to main | skip to sidebar

If ever there was a golfer associated with his home state, it was Jack Nicklaus and Ohio. Jack was born a third-generation resident of Columbus, where both dad and granddad earned reputations as standout local athletes. Young Jack quickly made a name for himself on the state's amateur golf circuit.

When he turned professional in 1960, Jack was every bit the Midwestern Boy Next Door--assuming the boy next door could drive a golf ball 335 yards down the middle of a fairway.

By 1964 Nicklaus was already a 14-time winner on Tour. That year he and bride Barbara built a 9,000 square-foot home outside Columbus--"believing," as Jack would recall later, "that we would never permanently leave Ohio."

But earning a living on the PGA Tour necessitated more golfer-friendly climes, so the Nicklaus' purchased a ranch-style home in North Palm Beach where Jack could hone his skills.

"I (fell) totally in love with the easygoing Florida lifestyle," Nicklaus told a biographer. "Outdoors most of the daylight hours, rarely needing to dress in more than shorts and golf shirt...and none of the pressures (of) big cities." When first-born son Jackie entered kindergarden in 1966, the Nicklaus' decided to move to Florida for good.

In 1970, a season in which Nicklaus recorded five tournament wins including the British Open, the family moved into their present home overlooking Lake Worth at Lost Tree Village.

These days Nicklaus, 67, is retired from competitive golf. Mostly he runs Nicklaus Design, his flourishing course architect business in North Palm Beach. The firm has designed over 250 courses in 27 countries and 36 states--including 27 courses in Florida alone.

In a career spanning five decades and 73 Tour wins, Jack transformed himself from a top amateur to golf's greatest player. Along the way, another transformation occured as well: from Midwestern Buckeye to unabashed Floridaphile.

Jack and Jackie adapt to the Florida lifestyle 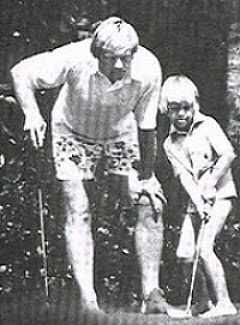 Holy Mackeral! Was Jack EVER this young?